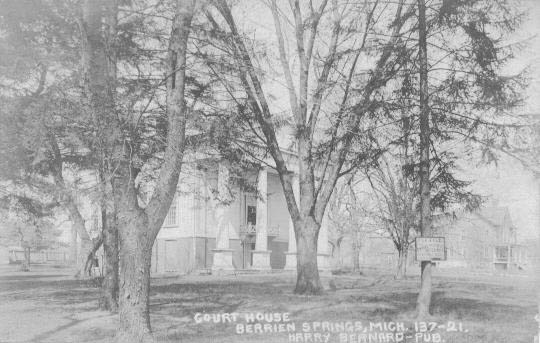 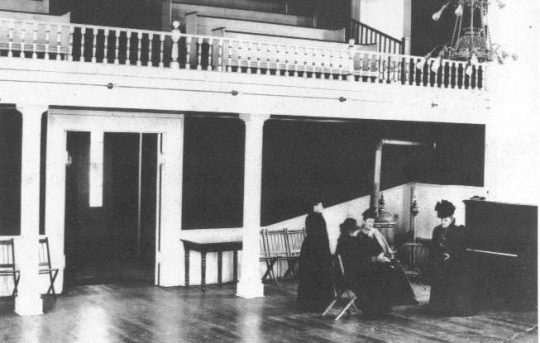 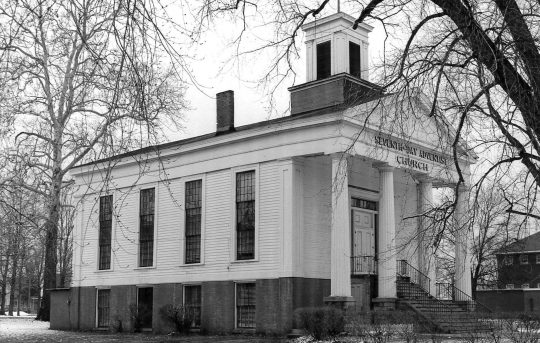 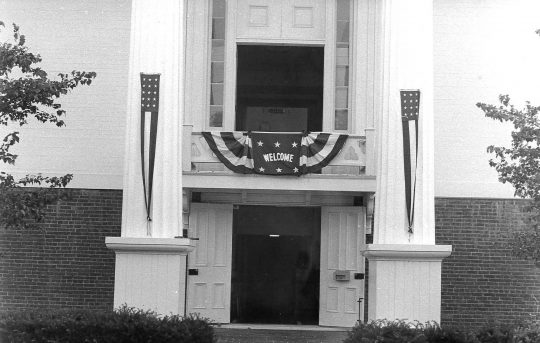 A portion of this article was adapted from the history written by Dr. Hazel Eidson in 1967.

The 1839 Berrien County Courthouse stands as the oldest existing county courthouse in the State of Michigan and one of the oldest in the Great Lake states.  Its history begins in 1837 when Berrien County’s commissioners agreed to the construction of a county courthouse and government building.  The Board of Supervisors accepted four lots of land just outside of Berrien Springs’ downtown as gift from early settler Francis Murdock for the erection of the courthouse.

Architect Gilbert Avery designed the Greek revival building in 1838, with the goal of creating an impressive building worthy of the county, sixty feet by forty feet with a sixteen foot belfry.  The courtroom was on the second floor and offices for departments, such as the Record of Deeds was located on the first floor.

Local builder James Lewis oversaw the construction and was so efficient that the building was completed in less than a year and on April 11th, Circuit Court Judge Epaphroditus Ransom convened court for the first time.  The building served as the county’s source of justice until 1894 when the seat moved to St. Joseph, although the building remained under the ownership of Berrien County for a number of years afterwards.

Since its beginning, the Courthouse had also served as a de facto community center for Berrien Springs and the surrounding area, with lectures, conventions, talks, and even plays held on the grounds and in the building.  After the courts and offices moved, the building continued to operate for the local community, including as a dance hall and even an armory for the Berrien Springs Light Guard.

In 1901, Emmanuel Missionary College, a private Seventh-day Adventist school, voted to move from Battle Creek to Berrien Springs.  While the school waited for the construction of their new campus outside of town, EMC rented the Courthouse and its grounds, serving as their first classrooms.  The courtroom served as the college chapel.  The college grounds were completed in 1902 and once again the building was left empty.

For a number of years, there were attempts to convert the building into a hotel, including one plan that would have added a third level inside the building to serve as a dance hall.  The County blocked all of them and the building was sporadically used until 1916, when the local Seventh-day Adventist Church approached the commissioners on the use of the building.

The County agreed to rent the Courthouse to the Church and would continue renting it to them until 1922 when the Church purchased the building and a portion of the lands.  The 1839 Courthouse underwent many modifications during this time, including the adding of an exterior staircase and the extension of the balcony to either side of the courtroom.  Despite the continued expansions, the congregation grew rapidly and in 1965 built a new church down the street.  In 1966, the congregation walked from the 1839 Courthouse to their new home, closing a chapter on the building’s history.

Prior to the creation of the Historical Commission in 1967, a group of historical preservationists had reported to the County as early as 1958 that between the 1896 and 1839 courthouses, that the latter was worth saving.  Using this as a jumping point, the Commission worked to raise funds to save the Courthouse and in 1976, the building opened as a fully realized museum, complete with exhibits where government offices once resided.

The museum operated without incident until 1989, when lightning struck the backside of the building and caused fire damage to the building.  During the renovation, new information about the courthouse’s history came to light and the BCHA took the chance to update the look of the courtroom, rendering it closer to its original look.

The 1839 Courthouse is listed on the National Register of Historic Places, is a Michigan Historic Site, and in 2013 was added to the Michigan Bar Association’s Legal Milestone trail.  Permanent exhibits exploring the history of Berrien County, the St. Joseph county courthouses, and the 1839 Courthouse itself can be found throughout the building.  Guests can also visit On the Docket Books and Gifts on the lower level.