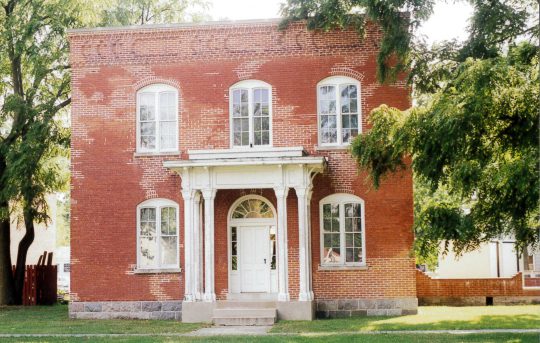 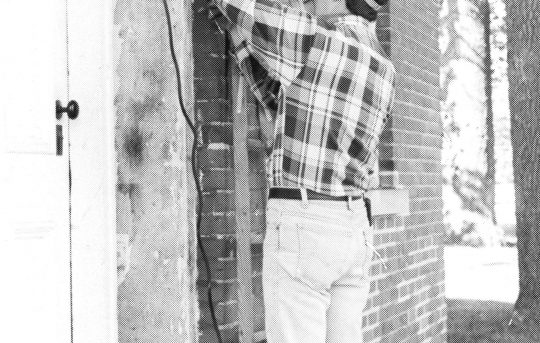 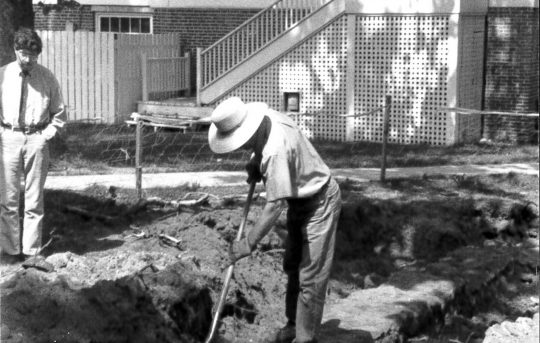 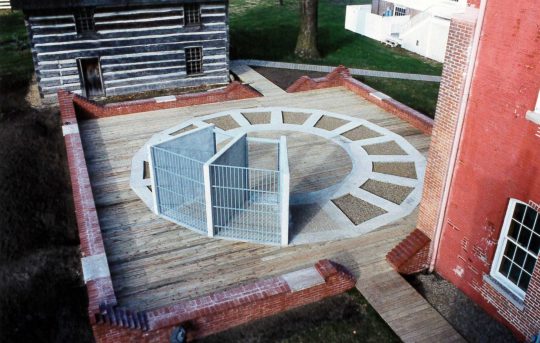 In 1838, the county commissioned the construction of the first jail building, a wooden two-story structure that stood on the site of the present jail plaza.  The building continued to serve the county until the late 1860s, when the commissioners agreed that it needed to be replaced and a home for the sheriff should be added.

The county once again turned to Gilbert Avery to design the new buildings and this time awarded him the construction bid as well.  Avery chose to employ the popular Italianate style of the time for the residence that complimented the existing buildings on what was quickly becoming the Courthouse Square.  For the jail, he chose to go more fanciful, giving the structure a whimsical skylight.

This building, completed in 1870, is two-stories tall and was designed with living space and the sheriff’s office on the lower levels and bedrooms on the second floor.  A rear wing housed the kitchen on the lower level and likely servants quarters upstairs as the space is connected with a staircase.  The exterior porch as it is seen today was added to the building much later and was not part of the original design of the house.  The office and at least on room upstairs had a pass-through door to the jail, allowing the sheriff to quickly access the space from inside the house.  Nine sheriffs called this building home while the county seat was in Berrien Springs and like other structures on the ground, was essentially abandoned after the seat was moved to St. Joseph.

As with the Courthouse and Records building, the Sheriff’s Residence was home to Emmanuel Missionary College (the future Andrews University) in 1901-1902 as classroom space.  And after they moved to their new campus, the building remained empty for several years.  Eventually the county sold the building to a private party and it was converted into apartments.  Unlike the Records Building, however, no additions were added to the Sheriff’s Residence and when the building was purchased by the Berrien County Historical Commission in 1975, the exterior updates went smoothly.  Before interior restoration could begin, a fire swept through the upper levels, forcing a full renovation.

Under the original restoration project, only the office was designed as it had been in 1870 while the rest of the lower levels were converted to temporary exhibit space, allowing for the the BCHA to host numerous exhibits throughout the year.  The upper levels were converted to office spaces and the research library while the rear wing was modified to house the archives and collections.  For a brief period of time in the 2000s, the lower level was home to the gift shop, but has since reverted to exhibit space.  To learn more about what is currently on display, visit our exhibits page.

The jail was completed at the same time as the residence and was also two-stories tall, but it was topped off with a skylight that illuminated the space and provided much needed ventilation.  The skylight was almost whimsical, shaped like an upside down cone topped with a glass globe and gave the rectangular building a distinctive silhouette.

The interior was just as unique, with Avery employing a circular pattern to the jail cells layout, with the center rising the full two stories.  The upper level contained eight larger cells designed to house women and children along with “less desperate characters.”  The lower level cells were much smaller, with sixteen in total available to house male prisoners.  The small size of these cells is often commented on by visitors, but the county jail wasn’t meant for long-term housing of criminals and because of the design of the building, prisoners had a chance to take walks around the cells while remaining confined to the building.

The lower cells also had two doorways – the outer being traditional cell bars while the interior was a solid door (likely made of metal) that allowed for prisoners to use the washtub located in the core.  The pump was connected to a 700 barrel rainwater cistern, which was located beneath the building.  Those housed on the upper levels were led in through an empty cell to use the space before being escorted back to their cell.

The design worked sometimes too well and in July 1883, eight prisoners took advantage of the layout to launch a daring escape.  After removing the tub, they pumped the cistern until the levels were low enough for them to drop inside.  They dropped into the now open hole and began to dig a tunnel under the north wall of the jail, but the soft ground caused it to collapse and the prisoners were forced to tunnel upwards.  They were successful and soon were on the lam.  The sheriff was joined by the county clerk and several townspeople and within days most of them were recaptured.  The story was quite thrilling and people from around the county turned the site into a short-lived tourist attraction.  Reports indicate a Niles woman took samples of the earth from their excavation site home with her.

After the county moved to St. Joseph, the building was left to fall in disrepair.  By 1916, time and vandalism forced the county to tear down the building.  Nothing was done with the former site until the BCHA created the Jail Plaza in the early 1990s.  Funded by several organizations, the plaza includes a layout of the lower level cells and two of them were fully reconstructed.  Future plans for the site include framing out the original walls and adding interpretation about the history of law and order in Berrien County.